the puddle
brimming with sky
alone at dusk

The opening line of this haiku shows the stark part of life that one faces after rainy days. The puddle reflects the deep reality of life that brings loneliness after those rainy days, mirroring the personal deeds or mistakes that take a person to the stage where they feel alone and helpless.

I love the way the poet used juxtaposition to connect both Earth and sky. The sky could be dreams, wishes, longing, and even hope that keeps on coming to the person who has lost everything and he or she relies on them. The sky also shows openness and meditative thoughts that give clarity to the person by brimming or supporting his or her reflection in the puddle. It may also give a sense of realization that a person has when alone at dusk. The dusk comes with various colourful shades of life that may be positive or negative. A person who relies on their fate can finally get a nature-giving helping hand, especially at dusk when all feelings and thoughts converged in certain beliefs and prayers.

The earth and sky are well connected in this haiku by a sky that provides a platform where a person can revisit his or her thoughts and analyze them at dusk, when there is complete silence all around that provides an ideal time to think over about what’s next in life after losing everything.

This haiku is quite interesting. The images captured my mind. Whether it’s a late sun shower or a cloud-filled sky, the poet, in my opinion, left enough space for me to resonate with.

The last line further adds more interpretations of what or who is alone. Is it the puddle or someone observing it? Such openings for the reader to think about and envision to me makes a wonderful haiku.

Note* The word “dusk” is considered a micro kigo which is a moment within 24 hours.

The small containing the vast. The vast reduced to the small. The power of focus and contentment in being solitary. I think these are the main themes of this haiku.

The last line, however, is a mystery. We don’t know if the line is referring to the puddle or the author, or perhaps a person in view. This uncertainty only adds strength to the poem.

The structure is also interesting. It can be read as one part or it having a break after line two. If it is read in one go, you can even say the last line is talking about the sky being alone at dusk. So, a seemingly simple haiku can derive many interpretations based on its format and pacing.

The sound makes this haiku balanced sonically. The “l” and “d” sounds give it a good mix of soft and hard sounds.

My only qualm with the haiku is that though it is highly effective and meditative, it is not so unique. However, with its original format, I think it makes up for this.

Did you enjoy this poem and commentary? Please let us know in the comments. 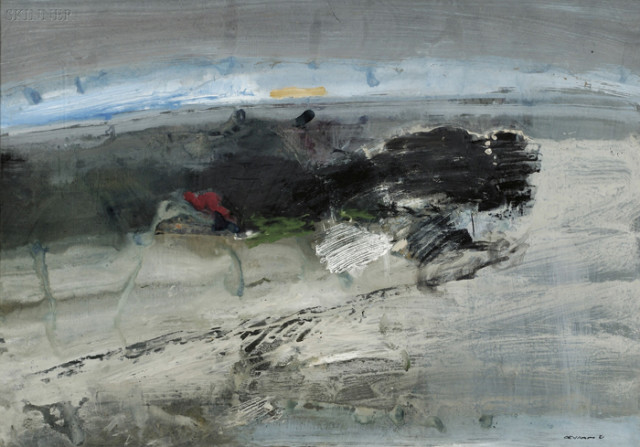